La Caverna Restaurant and Wine Bar is based in the heart of Temple Bar, the most vibrant area in Dublin City Centre 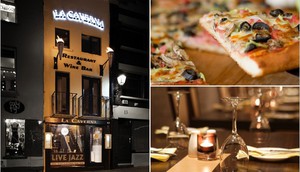 - It is believed that Temple Bar Street got its name from the Temple family, and specifically Sir William Temple (provost of Trinity College from 1609-1627), whose house and gardens were located there in the early seventeenth century.

- Fishamble Street in Temple Bar was the location of the first performance of Handel's Messiah on 13 April 1742. An annual performance of the Messiah is held on the same date at the same location.

- A run-down inner city slum by the mid-20th century, Temple Bar was long written off when state transport company CIE started buying up property here in the 1980's with the view to building a huge bus depot. While waiting for planning permission by the city, CIE decided to let out the empty premises at cheap rates. Attracted by the bargain rents, artists, fringe boutiques and alternative eateries started to shoot up all over Temple Bar.

- Fownes Street Upper and Lower take their names from Sir William Fownes, Lord Mayor of Dublin in 1708. Taverns in Fownes Street included the 'King's Arms' and the 'Shakespeare', while the part of the street adjoining the Liffey was formerly known as Bagnio Slip, after a bagnio or brothel in the area.

- The Temple Bar area is so called because it housed the first Jewish temple built in Ireland. The word ‘bar’ refers to the refusal of Catholics to allow the Jewish community to enter any of the adjoining commercial premises.

La Caverna Restaurant and Wine Bar is located on 12 Fownes Street, just behind the Central Bank. We welcome you any time to discuss the beauty of Temple Bar!